February 2 Groundhog Day – The story goes that watching a groundhog come out of its hole can determine the weather forecast for the coming weeks. If it is a sunny day and the groundhog sees its shadow, it supposedly is afraid and it goes back to its hole to sleep for six more weeks of winter. If the weather is cloudy and the groundhog does not see its shadow, it stays outside, which people believe means that the worst of winter is over and spring will come soon. About 10 communities in Canada have this tradition today, attracting the attention of tourists and media alike.  Wiarton Willie, from Wiarton, Ontario is the most famous groundhog in Canada ­and has been predicting the weather since 1956.

Groundhog Day is based on the ancient Christian tradition of Candlemas, which was halfway between the winter solstice and spring equinox.  It was when clergy would bless and distribute candles needed for winter. The candles represented how long and cold the winter would be. Germans expanded on this practice and selected an animal–the hedgehog–as a means of predicting weather. Once they came to America, German settlers in Pennsylvania continued the tradition, although they changed from hedgehogs to groundhogs.  The first Groundhog Day was February 2, 1887 at Gobbler’s Knob in Punxsutawney, Pennsylvania.

The true story is not quite as exciting. Groundhogs go into hibernation in the late fall; during this time, their body temperatures drop significantly, their heartbeats slow from 80 to five beats per minute and they can lose 30 percent of their body fat. In February, male groundhogs emerge from their holes to look for a mate (and not to predict the weather) before going underground again. They come out of hibernation for good in March.  Also they aren’t very accurate.  Data from 13 Canadian cities over the last 30 to 40 years indicates the groundhogs’ predictions were correct only 37% of the time.

Valentine’s day is celebrated on February 14th. It started in the Roman times when Roman Emperor Claudius II imprisoned and killed Valentine who was made a saint after his death.

Throughout time and all over the world there have been many Valentine day traditions. In Wales wooden spoons carved with keys, keyholes, hearts were given as gifts. In the past unmarried girls believed the first man they saw on Valentine’s Day would marry them within the year. In other places unmarried girls would write men’s names on paper and put them on clay balls then drop them in the water; whichever paper floated up first would be their future husband.  Today, in Canada candies, chocolates and cards are given to celebrate love, not just romantic love.

There are many symbols of Valentine’s Day like hearts, cupid, roses, doves and love knots but whatever you choose, it is a way to say you care.

We think the best way to beat the February Blahs is spending time with friends and family, so let’s wish Audrey and Silvano a Happy Birthday wish.

Audrey’s Birthday is on February 15, born one hour after Valentine’s Day ❤️. Audrey says that, “this year I am doing nothing “special” because of Covid 19.  Just saying home with my cat Oliver.  ( I wonder if he can “meow” Happy Birthday? “ )

There are many February birthdays in my family.  We used to always get together and celebrate them with a family February party.  One time when I was working  at the Hugh MacMillan Centre I was eating lunch in the big cafeteria and a man came in with 50 balloons and everyone in the cafeteria started to sing Happy Birthday along with him. That was a very special memory!!

Silvano’s Birthday is February 18th. Silvano says that this year he isn’t having a celebration  either, because of COVID. He remembers his  “best birthday was my 50th. I celebrated with a lot of my relatives and friends in a big restaurant.” 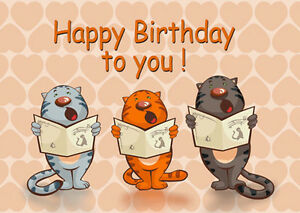